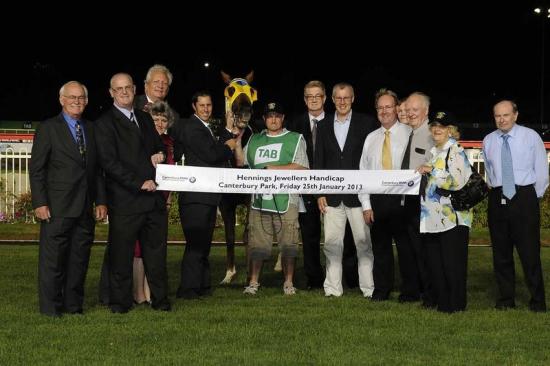 The Marc Quinn stable has again picked up the blue ribbon in their recent trip down the highway to Canterbury Park on the 25th of January, in race 6 of the 7 card night meeting.

The horse in question is no stranger to the winners circle having now won 5 races on end and she seems to be getting better each time she steps out. That horse is the very talented Sadler's Wish ridden a treat by apprentice super hoop Jenny Duggan claiming 3kgs, with Marc Quinn's thoroughbred being about as good as you get, he has bought her through the grades, as he indicated he would.

The ride for the connections this preparation has been one of continued celebration, not to mention a few bubbles of Champagne along the way, but all are expected to see that continue simply because they know the trainer at the helm is turning this filly out to perfection each time, having raced 9 times this prep for 5 wins and 1 placing for a total of just over $53,000.

The race under lights at Canterbury began relatively fast, Signoret and Pendolin got out cleanly and by the time they sorted out, the pair were duelling for the lead with a small break back to the others, with Sadler's Wish bowling along back in the field, and at that stage there was only one horse behind them, with about 800 to go in the HENNINGS JEWELLERS HANDICAP 1900m.

Mark Shean, could almost of taped his early description of the race because nothing had changed in the event up until about 600m to go and towards the turn, Duggan then asked the recently unbeaten mare to do what she does best and that's hit the line with the vigour of a horse that's going places. She answered the call, belting down the centre of the track, past the early leaders, and benefiting from the early pace in the race, helped a back marker like her, that's when she put pay to her rivals in a pure act of professionalism, between the master and the apprentice.