Sharky Goes Down Narrowly At Grafton 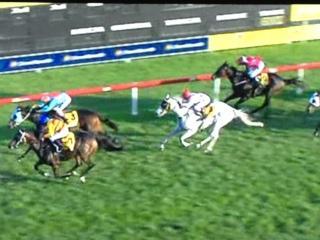 Three-year-old Bay gelding Sharky took part in race 6 at the Grafton, Clarence River Jockey Club on Monday the 5th, on a Dead 4 over 1425m in a class one handicap with Andrew Adkins aboard.

The Marc Quinn pairing jumped the gates nicely and in the early stages pressed on to settle in first position, controlling the tempo to push forward and string the field out many lengths, eventually kicking well clear coming to the turn.

Heading for the judge leading into the straight, Sharky was out by about 3.0 lengths, Hard Marker was putting in the big ones under his 59kg and as they drew to the line the latter stuck the neck out to relegate Sharky to the runner up position.

The Shaft gelding is racing honestly this campaign havin placed on 2 occasions since the prep begun.