Stradance Goes Back To Back 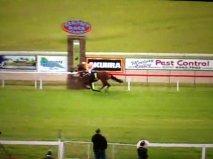 The Marc Quinn stable headed to Kempsey on Saturday, 10th of May with last start winner Stradance, heading out in race five in a class one handicap over 1250m with Andrew Adkins to ride the beautifully prepared three-year-old Bay Filly.

From the start, Andrew had his charge positive from the gates and on settling put Stradance on the plastic to control the race from the outset.

Coming into the straight Stradance was the only runner you wanted your money on, as the filly dictated the event, winning by 3.8 lengths on the line back to Magari's Dream, with Gentle Joe rounding out the trifecta.

The win gives Mr R Kirwan and Mrs S Kirwin back to back success's with a "BOBS" bonus attached landing connections a nice reward from a well placed run.

Stradance has now had 7 career starts for 2 wins, a second and 2 x thirds with earnings in excess of $29,000, with her last two win margins combining a total of 7.8 lengths.