Sharky Holds On For Third At Port 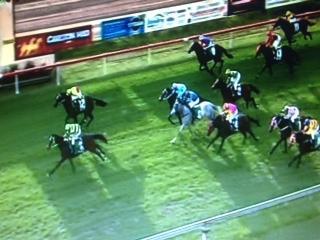 The Marc Quinn stable accepted with Sharky in race six of the Port Macquarie meeting held on the 18th of May with a field of 14 heading out in the 1500 meter benchmark 55 with Andrew Adkins aboard.

On leaving the gate Sharky was well out with Adkins guiding his mount to be in the top 4 and after 200m proceeded to go to the front with Cool Tycoon on its inside and Ransom Moment off its left flank.

Coming to the 800m Ransom Moment moved up on Sharky's inside to make a line of two with Blinking Rules attempting to even up on the leading pair.

On entering the straight Sharky fanned to be 5 off the fence and headed for the judge, Pradnya was coming up the inside, and Shadow Rein was full steam down the outside on fresh legs.