Three Stable Runners To Compete At Port On Saturday 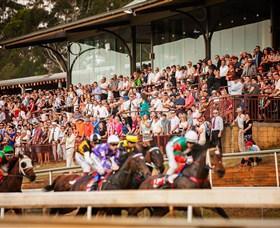 Marc Quinn at this stage will take three runners to the Port Macquarie racing club meeting on Saturday, 19th of July where the weather is currently overcast and a current track rating of a Dead four is present.

The first of those runners will take part in race two in a class 3 handicap over 2018m, with Explosive Scene jumping from barrier four in a field of nine with Raymond Spokes on board.

Explosive Scene is a three-year-old Bay gelding having career start number seven with one x win and one x placing holding prize-money of $13,600, his most recent runs have been at Port, running fifth of 12 on the 27th of June over 1506m, finishing 1.4 lengths behind the winner that time out and was last seen running near the tail of the field at Newcastle over a mile on a good three finishing 7.4 lengths behind the winner in a race time clocked at 1:38.35 seconds.

Marc has adjusted the gear for this outing removing the Tongue Tie, and Blinkers and has added Winkers in preference.

The second stable runner on the card will venture out in race six in a benchmark 50 handicap over 1512 m with Thiltre,  having start number four this preparation jumping from barrier nine in a field of 10 with Andrew Adkins aboard.

Thiltre is a two-year-old chestnut Filly having start number five with one x win and one x placing holding $17,815 prize-money.

Thiltre has had one win this preparation that being at Grafton over 1220m when she finished the run-off nicely when travelling midfield to score over the field of 12 in a time of 1:12.36 with the last 600m clocked at 36.05, and was last seen running 9th of ten at Grafton, finishing 5.3 lengths off the winner when sent out at 8-1.

Marc has added blinkers to the Fillies armory for this outing.

The final runner for the Quinn yard will head out in the last of the day, in a class one handicap over 1212m, with a field of 11 in the hands of the starter with Towcash resuming with Sam Clenton aboard jumping from barrier nine.

Towcash was formerly trained out of the Blanch yard and gets back to competitive racing after running fourth at Grafton over 1720m in a Dead 5.

The four-year-old gelding has had 7 previous starts, with one win coming about at Moree mid February, with earnings to date totaling $4,940.

The team wishes all runners and connections the best of luck for the local meeting in Saturday.