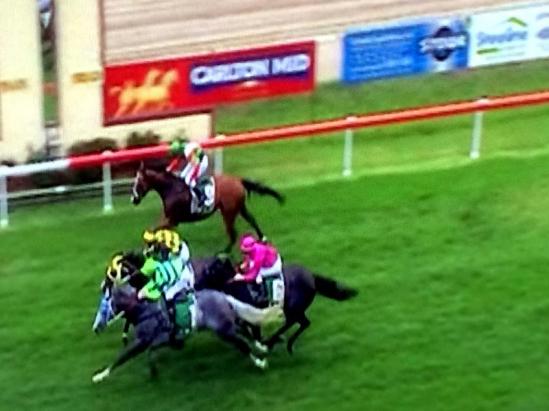 The Marc Quinn stable saddled up two runners for the local Port Macquarie  race meeting on Tuesday, November 25 with the first stable runner on show Zinging coming out in race two in an F and M maiden plate over 1200 m with the weather fine track rated a dead five, to be written by Andrew Adkins jumping from barrier 12 in a field of 14.

As the starter released the field Zinging was out in smart fashion, forward on landing with the early the stages of the race run at a fair clip, Adkins allowed Zinging to drop back a bit as Queen Of Oz set the pace with Worldly Wise prominent and for about switching second world war this third Aim For Glory was also amongst the leading bunch with Miss Fickle receiving no luck as they fanned for the judge Andrew Adkins was stoking his well prepared galloper up for the final tilt for the judge.

Into the straight Queen Of Oz had a kick with Zinging looking like having the race was parceled up, enter Dane Ruby, taking the shorts along the fence to land the prize a lip to Zinging with Queen Of Oz in third.

The final runner for the Mar Quinn stable was Towkash coming out in race four in a BM 50 handicap over 2000 m with Allan Chau aboard jumping from barrier nine in a field of 14.

As they loaded in the Carlton Mid gates Towkash stood behaved in (9), Royal Cymbal in (10) was a bit unsettled as the starter held them before releasing for the trip, to an even line as Towkash from the deep settled towards the rear, and passing the post the first time around it was Art Delargo in a forward position with Half Way To Heaven there Rapidous was prominent as The Hulk coming from the 11 joined the race leaders with Towash settling with three runners behind them coming round the side.

Coming past the thousand Chau instructed Towkash to take up a more forward passage and passing the 800m it was The Hulk as race leader Halfway To Heaven was second Art Delargo was there Lady With Spurs was back on the plastic with Towkash creeping up past that runner to be outside four deep on planning for the straight.

Into the straight the early leaders were gone, Art Delargo was making a fair fist of it with Towkash putting in the strides to claim the leader with Alpresto in hot pursuit  and the fresh legged Maybe Shady coming with that runner, and as they hit the line it was Alpresto a lip to Towkash (pictured) with Art Delargo in third place.