Explosive Scene Runs A Great 2nd To Qualify For Championships 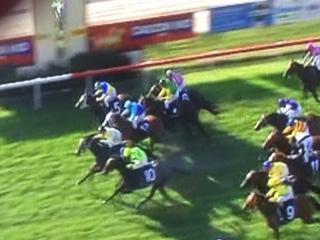 The Marc Quinn prepared Explosive Scene stayed local at the Port Macquarie race club meeting on Friday, March 6 with a country championship qualifier on offer to runners from certain race meetings to qualify for the championship final at Randwick with Alan Chau aboard the handy youngster jumping from barrier two in a field of 14.

As the starter released the talented field with five last start winner's and six last start, runners ups vying for the prize with the early race leader Prince Mayted with Sixty Paces,  punching up on its inside Honest Opinion was third Sheza Gypsy was fourth with Explosive Scene staying on the rail from an inside gate to be traveling midfield on settling.

The dual upfront was on in earnest as the field led into  the turn, with the order unchanged as Sixty Paces was still prominent with Prince Mayted, Honest Opinion, and Sheza Gypsy with Alan Chau taking a closer order on rounding the bend steering  the four-year-old gelding Explosive Scene underneath runners as the field straightened for the run in, in the $100,000 event.

On straightening it was a duel to the line with the whole field spread out across the track as Explosive Scene come through on the rail under the vigorous riding of Chau, as Sheza Gypsy  kept on with a kick and Rinn Pierre ran on from worse than midfield and as they came to the line it would be Sheza Gypsy a half head to Explosive Scene with a further neck back to Rinn Pierre with Marmaduke's Lady running on for fourth.

The result means that the first two are balloted into the final championship qualifier in Sydney which is a great result for trainer and connections with the $20,000 second prize today not doing any harm to the bank balance either. Well Done.