Explosive Scene To Give All For Country Championship Tilt 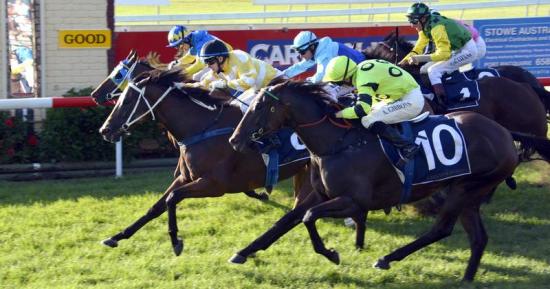 The Marc Quinn racing stables of Port Macquarie will supply one runner in the form of Explosive Scene to race 4, in the final of the Country Championships over 1400 m to be held at Royal Randwick with fine conditions forecast racing on a soft six with the the true position.

After a number of heats around the state Explosive Scene comes into this race with great recent form with the gelding to be ridden by Damien Oliver jumping from barrier three in a field of 16 with $291,000 in prize-money on offer with the first prize pool being $150,000.

Explosive Scene is a four-year-old Bay gelding having start number 12 with two wins and three placings earning prize-money in excess of $45,000, recent efforts since resuming this preparation have been at Grafton on February  second finishing first of 14 over 1202m with Allan Chau aboard, he then returned to Grafton on February 15 in a class three finishing second 14 with Allan Chau the pilot landing 1.3 lengths behind the winner with Explosive Scene then competing at Port for a spot in this final when racing on March 6 finished off strongly to land second of 14 with Allan Chau aboard going down narrowly on that occasion to She's A Gypsy in a race time of 1:11.75 with the last 600m in 35.12.

Marc elected to trial Explosive Scene at Port on March 27 in preparation for this outing over a thousand metres with Andrew Adkins aboard landing the win in that heat by head on the line to Deceptive.

The stable would like to wish connections of Explosive Scene the best of luck in his endeavour to take out the Country Championship at Randwick on Saturday.